Written by Mayank Published on October 1, 2021 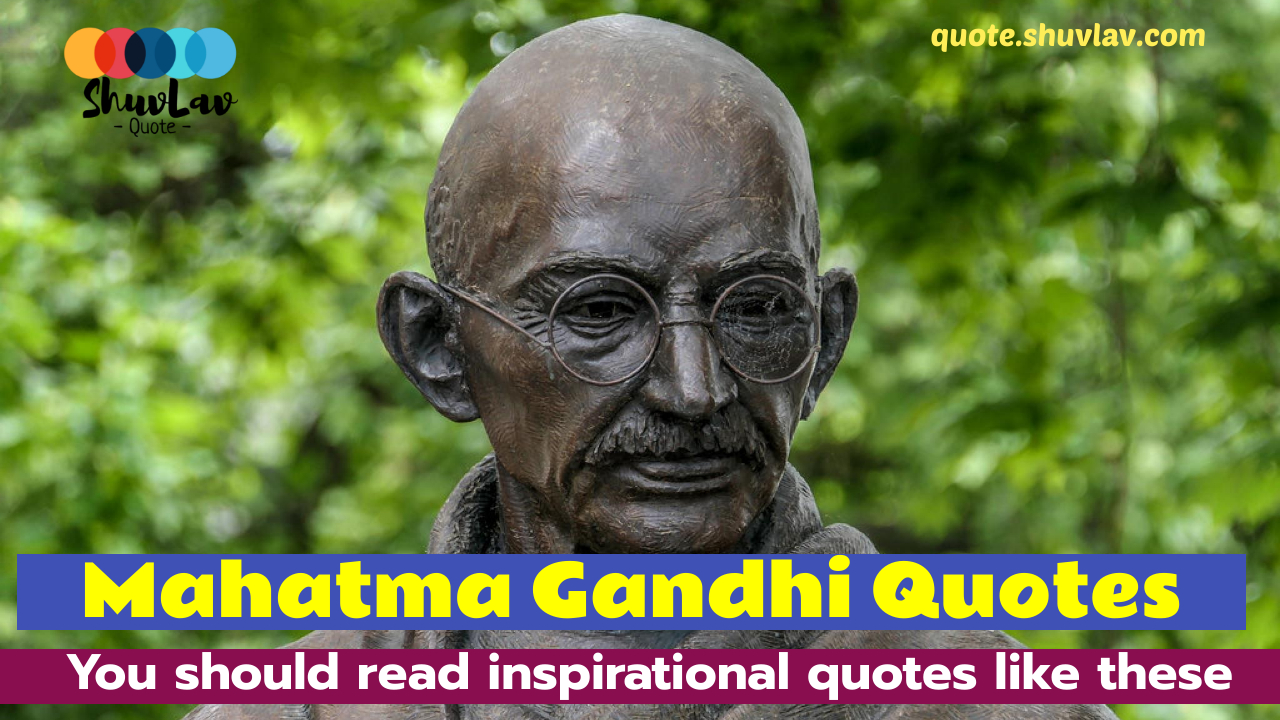 Famous Quotes by Mahatma Gandhi: Mahatma Gandhi is known as the father of the nation. His life, teaching, and personal beliefs have inspired many. One of my favorite quotes from Mahatma Gandhi is: “Be the change you wish to see in the world”. I think this quote is a great example of how we can use small positive actions to make a big difference. By doing small things, we can create a bigger impact than swimming against the tide. His philosophy on life was based on non-violence.

His goals were freedom from oppression and freedom from want. On April 12, 1947, he is famously quoted as saying, “I wish to see India as a land of milk and honey. Where there is no injustice, no untouchability, no untruth, no fear, no hatred, no gloom, no tears, no pain.”

Here is a list of quotes from Gandhi that should help you to understand the man and his true legacy. Gandhi was an amazing person and individual that should be remembered and respected.

If we could change ourselves, the tendencies in the world would also change. As a man changes his own nature, so does the attitude of the world change towards him. We need not wait to see what others do.

I will not let anyone walk through my mind with their dirty feet.

Nobody can hurt me without my permission.

Happiness is when what you think, what you say, and what you do are in harmony.

The weak can never forgive. Forgiveness is an attribute of the strong.

A coward is incapable of exhibiting love; it is the prerogative of the brave.

Freedom is not worth having if it does not include the freedom to make mistakes.

If we are to teach real peace in this world, and if we are to carry on a real war against war, we shall have to begin with the children.

If I have the belief that I can do it, I shall surely acquire the capacity to do it even if I may not have it at the beginning.

The best way to find yourself is to lose yourself in the service of others.

Strength does not come from physical capacity. It comes from an indomitable will.

You don’t know who is important to you until you actually lose them.

I object to violence because when it appears to do good, the good is only temporary; the evil it does is permanent.

You must not lose faith in humanity. Humanity is like an ocean; if a few drops of the ocean are dirty, the ocean does not become dirty.

Daughters Day Quotes: That Will Make You Believe In The Power Of Love
Daughters Day Quotes: Today is the day when you are all proud of your daughters. Make this day memorable for
Richard Feynman Quotes That Will Change The Way You Think
Richard Feynman (1918-1988) was an American physicist, whose contributions to the field of quantum
Bhagavad Gita Quotes: Powerful Words Of Wisdom For Everyday Life
Bhagavad Gita Quotes: During the Mahabharat War, Arjuna (a Pandav prince) and his charioteer, Lord Krishna,
Happy Krishna Janmashtami Quotes: Share with your family and friends
Happy Krishna Janmashtami Quotes: To commemorate the ‘Lord of Love,’ the event is marked by pomp and c
Deep Raksha Bandhan Quotes For Sister From Brother: Will Touch Your Heart
Raksha Bandhan is the most blessed day of every girl who celebrates it with her brothers. To commemorate the
10 Best Raksha Bandhan Quotes That Will Touch Your Heart
Raksha Bandhan is an Indian festival celebrated on the day of the full moon in the Hindu month of Kartik. It
11 Miss You Quotes for Dad: Inspiring And Touching Daddy I Miss You Quotes
Miss You Quotes for Dad: Today we are going to share some of the most heart warming father’s day quotes. We

One thought on “Famous Quotes by Mahatma Gandhi: Should read inspirational quotes like these”