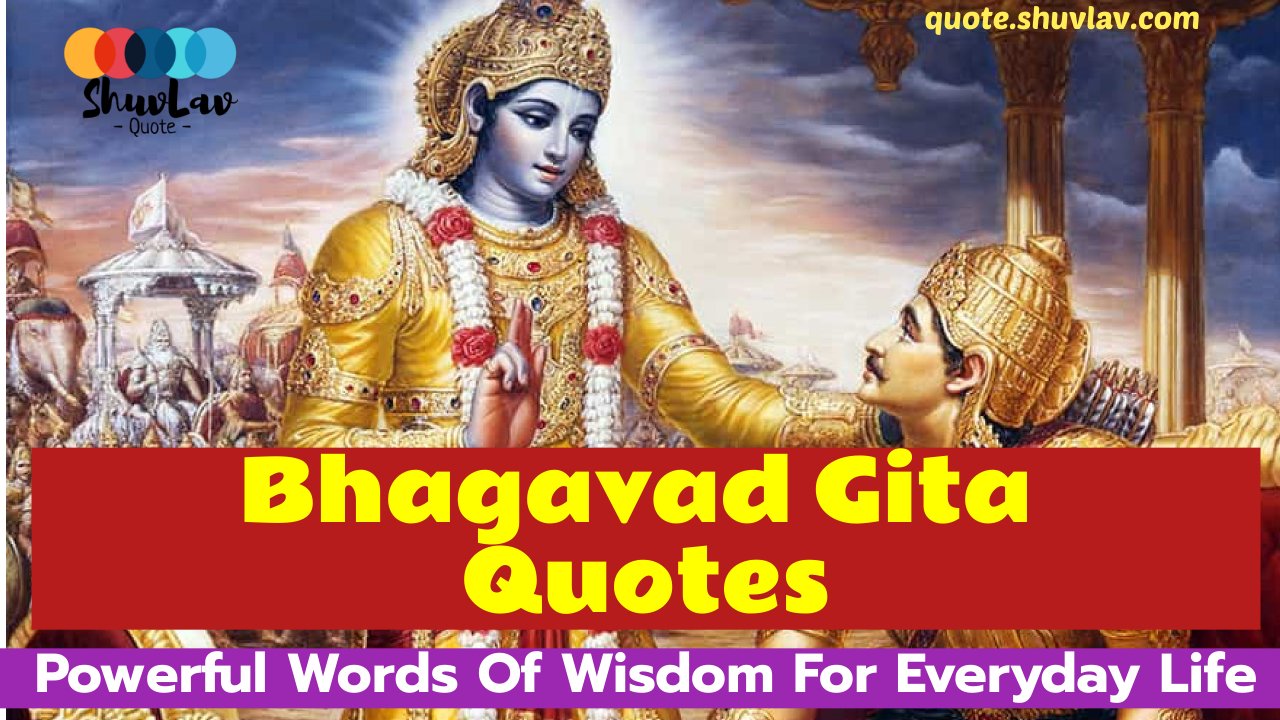 Bhagavad Gita Quotes: During the Mahabharat War, Arjuna (a Pandav prince) and his charioteer, Lord Krishna, had a conversation. Lord Krishna expressed several sensible philosophical ideas that are still relevant today. Sri Krishna took on human form in order to rid the world of evil and misery. He was an Avatar of Lord Vishnu, with the power to extinguish the negative powers of demons across the globe. According to the Hindu calendar, he was born on the eighth day of Krishna Paksha in the Shravana month.

The Bhagavad Gita, or “Song of God,” is a Hindu scripture. It is a portion of Mahabharat and consists of 700 verses by Lord Krishna.

The Bhagavad Gita is a Hindu scripture that takes place in history when Arjuna and Krishna are on a quest to realize the supreme power of God, Bhagavan. It has been described as an epic poem that is written in the form of dialog between Arjuna, the warrior, and Lord Krishna, the God. It is the shortest of the three great epics of India, the other two being the Mahabharata and the Ramayana.

The answers to all of our issues can be found in this magnificent scripture. For a better knowledge of life and the rule of Karma, it is recommended that you read the Bhagavad Gita on a regular basis.

In the Gita, Krishna says, “The mind is ever restless and always seeking happiness for itself. The wise man, therefore, strives to subdue the mind so that it may remain fixed on Him.” In this blog, I will try to provide you with some of the more significant verses from the Gita.

“ Neither in this world nor elsewhere is there any happiness in store for him who always doubts.”

“The wise man lets go of all results, whether good or bad, and is focused on the action alone.”

“You have the right to work, but never to the fruit of the work. You should never engage in action for the sake of Reward, nor should you long for Inaction.”

“No one who does good work will ever come to a bad end, either here or in the world to come”

“Curving back within myself I create again and again.”

“We behold what we are, and we are what we behold.”

“It is better to live your own destiny imperfectly than to live an imitation of somebody else’s life with perfection.”

“The power of God is with you at all times; through the activities of mind, senses, breathing, and emotions; and is constantly doing all the work using you as a mere instrument.”“ Man is made by his belief. As he believes, so he is!”

The Bhagavad Gita is one of the most important texts in Hinduism, a philosophical dialogue between the god Krishna and his human friend Arjuna, in which Krishna reveals his universal form to Arjuna, and then leads him in a discourse on the true nature of reality, spirituality, and human purpose.

Happy Krishna Janmashtami Quotes: Share with your family and friends
Happy Krishna Janmashtami Quotes: To commemorate the ‘Lord of Love,’ the event is marked by pomp and c
Success Quote for Students: You Should Know That You Can Achieve Anything
Success Quote for Students: This is a collection of quotes that motivate students to study and work hard to
11 Miss You Quotes for Dad: Inspiring And Touching Daddy I Miss You Quotes
Miss You Quotes for Dad: Today we are going to share some of the most heart warming father’s day quotes. We
These 11 Sushant Singh Rajput Quotes have inspired me
Sushant Singh Rajput Quotes: I’m sure you will agree that we are living in an age of unbridled success, where
12 Quotes for Health is Wealth: Will Inspire You To Take Care Of Yourself
Quotes for Health is Wealth: Our health and our wealth are more closely linked than many of us realize. When